Google Maps Route Optimization: Can You Trust It?

What is route optimization?

Route optimization is the process of finding the most cost-efficient route for a set of stops. A common misconception is that this is only getting from A to B as fast as possible.

Route optimization minimizes driving time or mileage for multiple stops. It takes into account several important factors, such as the number of vehicles in the fleet, the number of stops on the route, and delivery windows.

Optimal route mapping is not only crucial for delivery businesses but, in fact, for all companies operating in the last mile industry. Inefficient routes lead to increased transportation and labor costs that will soon surpass a company’s revenue.

Can Google Maps be used for route optimization?

Google Maps route planner is one of the most useful tools on the market for basic routing schemes. It’s free of charge, easy to use, and doesn’t require any particular technical skills.

How do you plan a route on Google Maps? Well first, the Google trip planner will do the following when planning a simple two-point route:

So to recap, the Google Maps route planner finds the shortest path between two or even multiple stops with relative ease.

However, route optimization is not about discovering the fastest way from A to B to C; it is about finding the shortest route from A to Z.

Simply put, an optimized route is one where all the stops are in an optimal order.

Google’s route planner is not designed to do that. Users still must plot a route on Google Maps. To obtain an optimized driving route in Google maps, the users themselves would have to determine the most efficient stop rather than rely on Google route optimization.

The optimization of a stop order is one of the significant factors that distinguish route optimization software from Google Maps web mapping service.

Another factor to consider is that Google Maps only allows planning a route with ten waypoints (stops) at a time. To plot a route on Google maps with up to 25 waypoints, a subscription to Google’s paid version is needed – and depending on your usage, this becomes very expensive.

As discussed previously, the user would need to put the stops on the route in the optimal order manually to get the most efficient driving route.

Google has the option to drag the waypoints in the desired order but figuring out a perfect stop sequence is exceptionally time-consuming if done manually.

Manual route planning in Google Maps becomes more difficult as the number of couriers to plan routes for increases. It takes hours, if not days, and sooner or later, inevitable human error will result in inefficient routes.

Rising operational costs in delivery due to unoptimized routes are most commonly related to increased fuel usage and having too many vehicles/drivers in the fleet.

For that reason, companies search for a professional route optimization tool that would plan the best possible route for all the drivers in the fleet in a matter of minutes.

How does route optimization software differ from the Google Maps route planner? 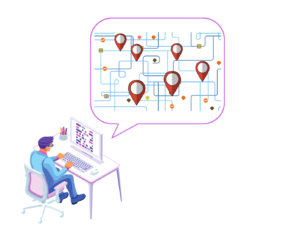 The vehicle routing problem (VRP) is one of the most challenging obstacles in computer science, and its main objective is to minimize the total route map cost.

To calculate various parameters and find a way to deliver as fast and cost-efficient as possible, while also meeting the customers’ demands, is extremely complicated for a human being.

Not to say impossible, at least in a reasonable amount of time. That’s why route optimization software uses algorithms.

Route optimization algorithms find the most optimal order of all the stops on the route with their complexity to find the most efficient route. Route efficiency is critical for last-mile companies as the costs related to shipping are persistent and have the most significant effect on profitability.

Route optimization software will do the following when planning and optimizing routes:

What to look for in a route optimization software

Not too long ago, the use of route optimization software was considered an advantage that only enterprises could afford. Nowadays, even the smallest companies can find budget-friendly software that will recoup their investment in no time.

As the selection of providers is extensive, having a good knowledge of what core functionalities the route optimization tool should have is essential.

When choosing a route optimization software, these functionalities should be included:

­A great software allows the user to see the waypoints and routes on the map and as a clear list with all the relevant information included (e.g., driver, ETA, customer information, etc.). Any changes made to orders should also be automatically reflected in the routes and on the map.

­Being able to see the drivers’ location in real-time and if they reach the customer on time will give reassurance that everything is running smoothly. Should a driver be delayed, the customer is notified in advance, and thus, negative feedback avoided. If the driver is unable to reach a waypoint, the order could easily be assigned to another nearby employee.

­The best route planning software has apps for drivers, that allow them to see all their tasks for the day with relevant client information. The app helps drivers navigate on the already optimized route and reach customers on time, even in unfamiliar areas. Within the app, it is possible to change the delivery status, so that the office staff has a real-time overview of what’s happening in the field.

­A great way to boost customer experience is to send personalized messages to customers. These could be updates about the upcoming delivery or even a tracking link for them to see where the driver is and at what time to order should arrive.

­As the delivery information is available in the app and proof of deliveries can be signed electronically, drivers no longer need to carry stacks of paper with them. Digital documents don’t need physical storage space, can be sent to the office staff and customers in minutes, and help companies leave a smaller ecological footprint.

Using the Google route planner is probably the best free software on the market to plan simple routes.

While it might be a temporary solution for small companies managing with only one driver with a handful of orders per day. Google Maps route planner won’t be enough to increase revenue, cut delivery costs, and scale the company.

Google Maps is defined as a web mapping service and shouldn’t be confused with a route optimization platform. The most crucial factor that helps companies decrease fuel and fleet costs when planning a route is the optimal order of waypoints.

Google Maps directions have never been designed to automatically reorder stops in the most efficient way, so it will not provide an optimal multi-stop route like a driving route map would. Inefficient routes result in raised fuel and vehicle maintenance costs, more significant wages, and unhappy customers.

A professional delivery route optimization software helps companies overcome the problems associated with semi-manual route planning and is affordable even for the smallest businesses.

Route optimization software plans the most efficient route in a matter of minutes, helps to increase cash flow, and lower operational costs. The best route planner apps are listed here.

Protect your car from thieves

Read more
We use cookies on our website to give you the most relevant experience by remembering your preferences and repeat visits. By clicking “Accept All”, you consent to the use of ALL the cookies. However, you may visit "Cookie Settings" to provide a controlled consent.
Cookie SettingsAccept All
Manage consent

This website uses cookies to improve your experience while you navigate through the website. Out of these, the cookies that are categorized as necessary are stored on your browser as they are essential for the working of basic functionalities of the website. We also use third-party cookies that help us analyze and understand how you use this website. These cookies will be stored in your browser only with your consent. You also have the option to opt-out of these cookies. But opting out of some of these cookies may affect your browsing experience.
SAVE & ACCEPT